In 1970, the Department for Condensed Matter Physics researched the structures and dynamics of crystal lattice systems in order to contribute to the understanding of mechanisms that determined the macroscopic properties of condensed matter.

The results were constantly being used for practical purposes. In 1970, research in proteins was being carried out, which was very interesting from the point of view of both theory and application.

Three laboratories operated within the Department in that year: 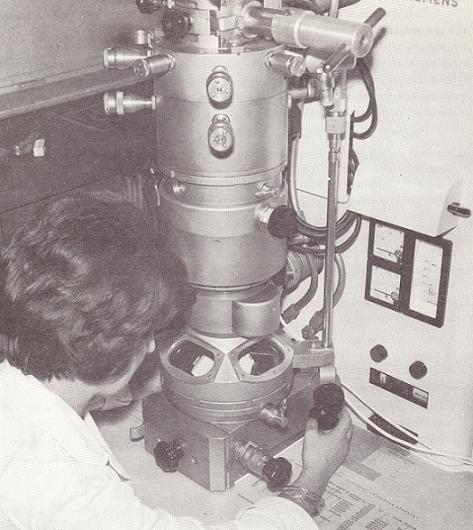 Figure: Microscope that was used for researching the defect structure of crystals. 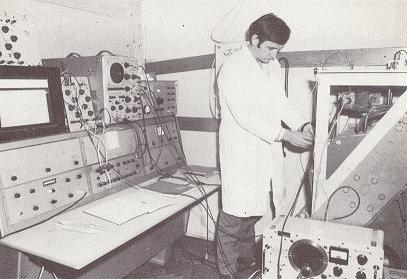 Together with the Boris Kidrič Institute of Nuclear Sciences, Vinče, the Department organised the first Yugoslav Summer Academy for Magnetic Resonance, which was held in Belgrade at the School for Radioactive Isotopes between 29 September and 3 October 1969. 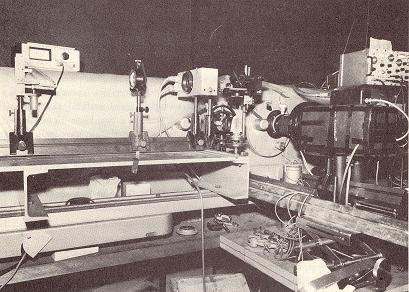 In 1971, the Department for Condensed Matter Physics still consisted of three laboratories, namely the Magnetic Resonance Laboratory, the Electron Microscopy Laboratory, and the Plasma Physics Laboratory.

The biggest was the Magnetic Resonance Laboratory, where research was conducted, as in previous years, in three main directions:

Numerous important findings were reached in 1971: 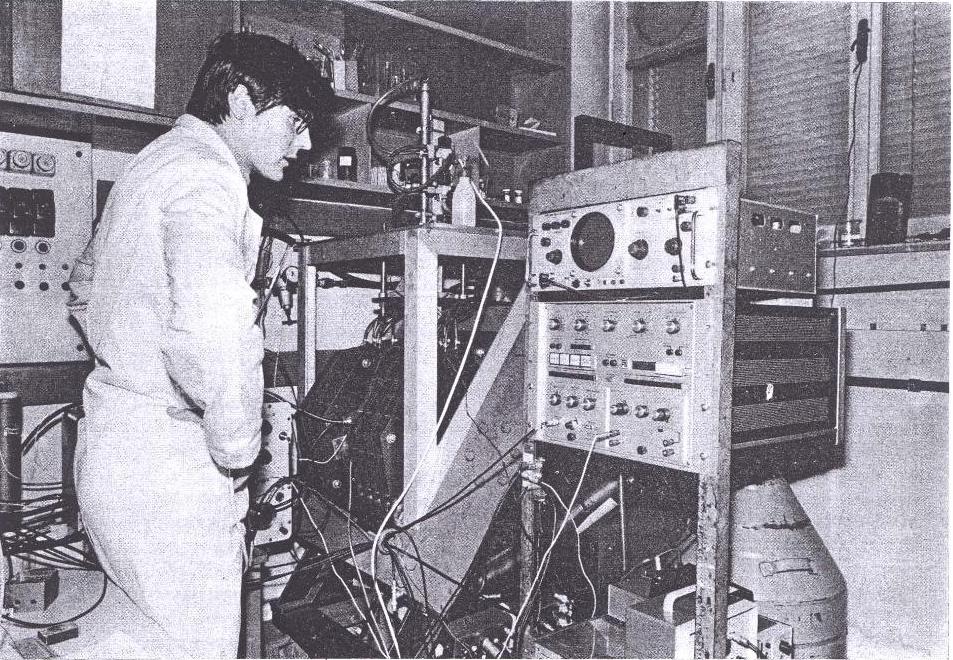 The Department also increasingly collaborated with other scientific fields: in cooperation with the Faculty of Medicine the thermography method for skin based on cholesteric liquid crystals was introduced, while the properties of soft and hard tissues were researched with electron paramagnetic resonance in biophysical and medical research. Moreover, it was discovered that it is possible to characterise cancer tissue with nuclear magnetic resonance, which was a very important achievement.

International collaboration of the Jožef Stefan Institute with the Indian Council of Agricultural Research from New Delhi should also be mentioned. To meet their needs, the Department produced a new type of pulsed NMR spectrometer for non-destructive oil and moisture content determination in vegetable seeds. 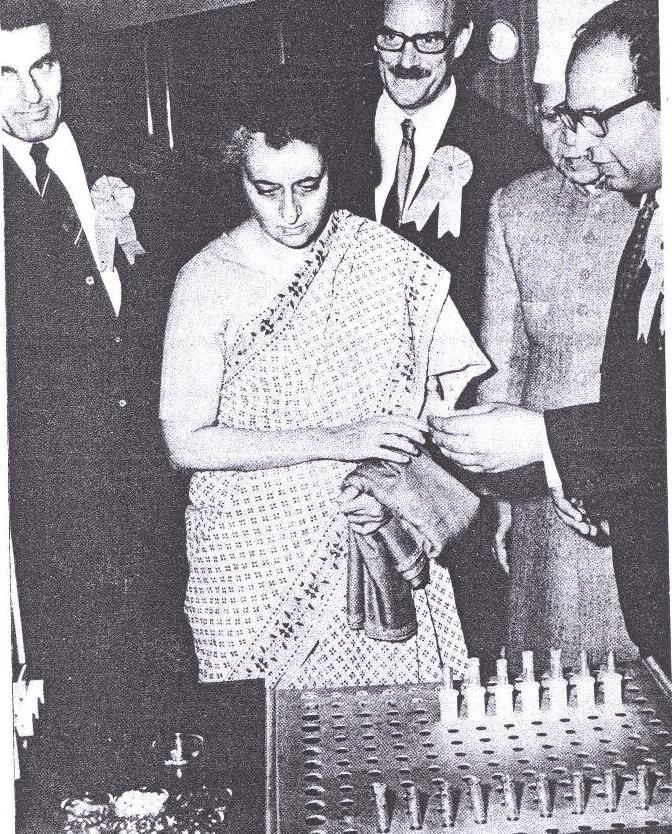 Figure: Indian Prime Minister Indira Gandhi observing the NMR spectrometer that was made at the Jožef Stefan Institute. Professor Osredkar with a representative of the United Nations and the director of the Indian Institute are also pictured.

There were still three laboratories functioning in the scope of the Department. The research continued and working groups were reaching more and more findings and achieving more and more results.

In relation to the research carried out in the Magnetic Resonance Laboratory, we should mention Brillouin spectrometry, one of the new methods developed in that period. The researchers built a Brillouin spectrometer that measured elementary motion in condensed matter in the frequency range of 1 GHz to 100 GHz (e.g. hypersound waves in crystals, fluctuations in alignment during phase transitions in ferroelectrics and liquid crystals). 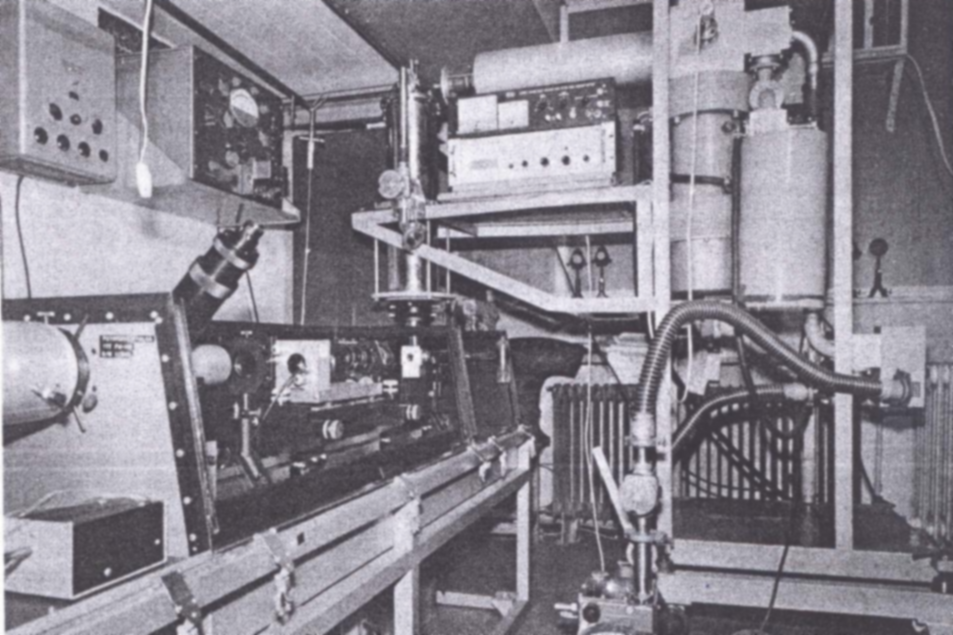 International scientific cooperation continued and the Department built a pulsed NMR spectrometer for non-destructive oil and moisture content determination in organic systems, which was handed over to the Zagreb Institute of Biology. A spectrometer of this exact kind was delivered a year earlier to the the Indian Council of Agricultural Research in New Delhi.

In 1972, the Electron Microscopy Laboratory carried out work in three areas: 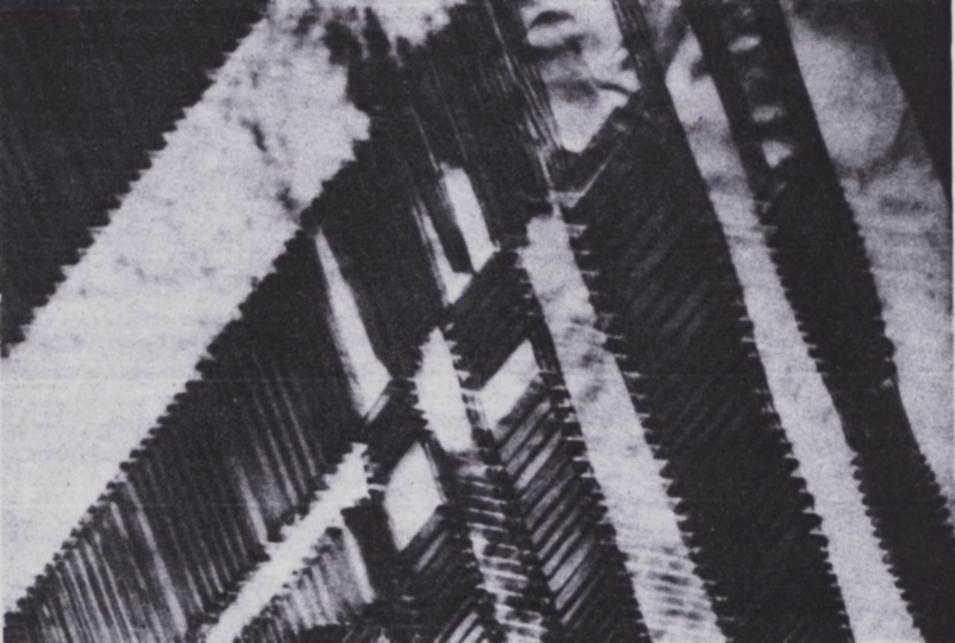 The Plasma Physics Laboratory extended its research in nonlinear plasma effects to the ion acoustic waves and drift waves. This research was performed in column-like plasma, which was created by plasma diffusion along the magnetic field. Plasma diffused from plasmatic origin, in which it formed due to the heating of the gas on the basis of electron cyclotron resonance.

The Magnetic Resonance Laboratory transfered more and more of the experiences acquired during basic research into medical fields, such as research of tissue, biophysics, chemical industry, and agriculture. This further increased the applied dimension of the Laboratory.

Research in the field of liquid crystals should also be acknowledged. With a new method which was initially developed in Ljubljana, measurements of the anisotropy of the self-diffusion tensor in the nematic phase and in the smectic-A and smectic-B phases were carried out.

The Magnetic Resonance Laboratory also constantly worked on the development of measurement methods. In 1973, they developed a new double-resonance method, which allowed for measuring the natural length of resonance lines. Another important achievement was the utilization of thermography with liquid crystals to diagnose thyroid gland disorders and circulatory dysfunctions in upper- and lower-extremity vascular system diseases.

A considerable achievement was also the development of a prototype device and the introduction of cryosurgery for the destruction of malignant tissue in cooperation with the Institute of Oncology. In the research of hard tissues with magnetic resonance, we should mention the alignment of hydroxyapatite microcrystals and the discovery of the relation between the kinetics of hydrogen atom recombinations and the resistance to caries, i.e. tooth decay.

Figure: Pulsed NMR analyser used to determine oil and moisture content in vegetable seeds on the basis of nuclear magnetic resonance. The apparatus pictured was built at the Institute and sent to Tehran, to the Iranian Ministry of Agriculture.

The work of the Electron Microscopy Laboratory in 1973 was oriented towards research of structural defects in crystals, damage in matter induced by ion bombardment, properties of thin layers and metal-semiconductor transitions.

During the research carried out for the “Microelectronics Project”, a sputtering device was made that enabled the preparation of thin layers of any material, whereas the research focused predominantly on the study of conductive layer properties of gold and tantalum and the optimisation of deposition parameters for these layers. 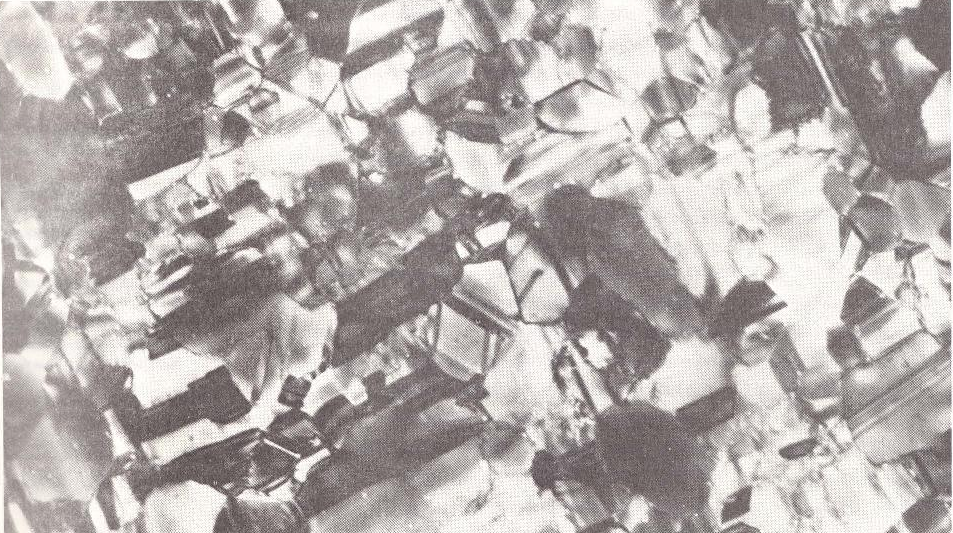 Figure: Cathodically sputtered layer of gold. Argon, which is incorporated during the sputtering, is emitted in small bubbles during the overheating. (magnified by 150 000)

The Plasma Laboratory focused mostly on the research in nonlinear effects in plasma, in which drift waves appear.

In this year, the Magnetic Resonance Laboratory remained focused on these four main areas:

Researching the ferroelectrics and antiferroelectrics, the Laboratory continued studying the dynamics of phase transitions in the systems of the type order-disorder,  which can be listed with the Ising model in a transverse tunnelling field, and calculated the dynamic susceptibility of such a system. The discovery of a new ferroelectric CsD2PO4 whose Curie temperature is   -5.5°C compared to the Curie temperature of CsH2PO4, which is only –119°C, is also worth noting. This ferroelectric has one of the largest isotope effects discovered so far.

The research in liquid crystals yielded the determination of the self-diffusion tensor of the smectic-A and smectic-C phases of the liquid crystal TBBA. The results of this research demonstrated that the model of a “two-dimensional liquid” that was used for describing the smectic-A phase in that time was not entirely adequate.

New findings were reached also in the development of new methods of magnetic resonance. One of them was the discovery of a new double-resonance method for studying rare isotopes and systems with a weak signal-to-noise ratio with the help of the “solid effect”.

Applied research contributed to the practical realization of the cooperation with the Salonit factory from Anhovo. Using the NMR method, which was developed by the Department, the factory was able to determine the free and the bound water content in different types of cements. The Department also built a pulsed NMR spectrometer for non-destructive oil and moisture content determination in vegetable seeds for the Bhabha Atomic Research Center in Bombay.

In the field of medicine, they introduced a method of spin markers in EPR. They used this method to research the functioning of enzymes and transport through tooth enamel. 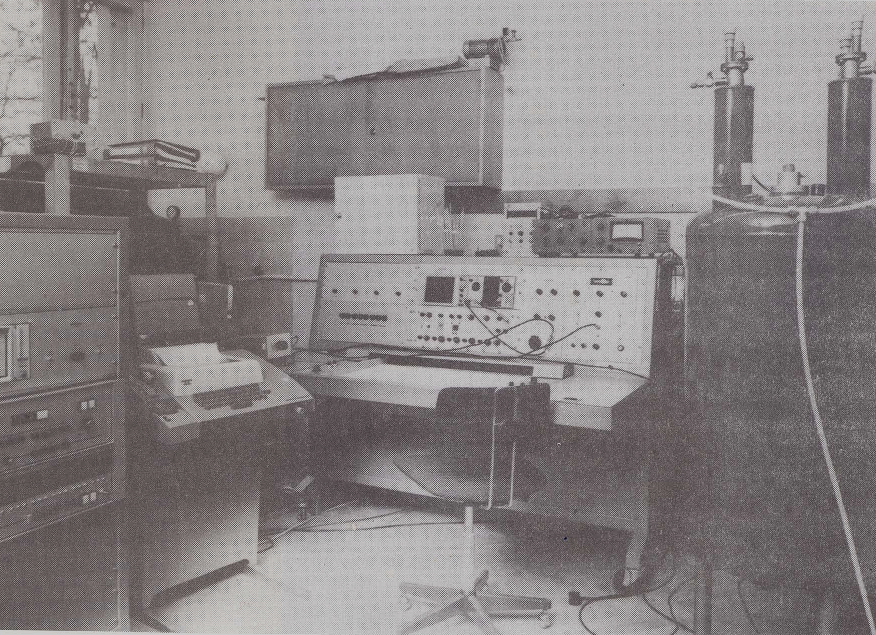 Figure: The new pulsed NMR spectrometer with a superconducting magnet (magnetic field up to 70 kilogausses).

The Electron Microscopy Laboratory was active in four main areas: 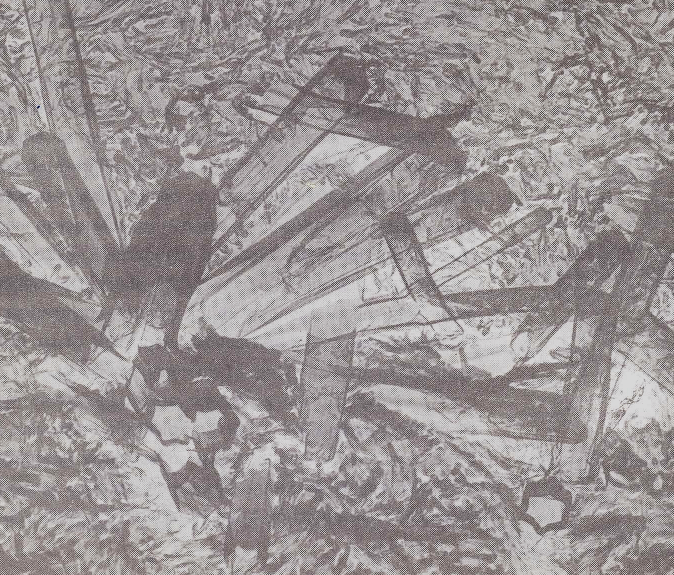 Figure: The solidity of a cement depends on the composition, size, and distribution of particles of the new phases created during hydration. Electron microscope image shows a group of ettringite crystals surrounded by crystallites of calcium silicate hydrate.

The Laboratory acquired a new device for ion erosion, which enabled the thinning of various complex materials for transmission electron microscopy. Consequently, in cooperation with the Magnetic Resonance Laboratory, they started researching the alignment of microcrystals in tooth enamel in relation to studying its resistance to caries.

The work done in the Plasma Laboratory was focused on building a new device for the research of plasma in magnetic field. The researchers also studied electronic circuits, which allow for the simulation of some nonlinear phenomena in plasma. Furthermore, they were interested in the problem of creation of a magnetic field when matter is irradiated with laser light.